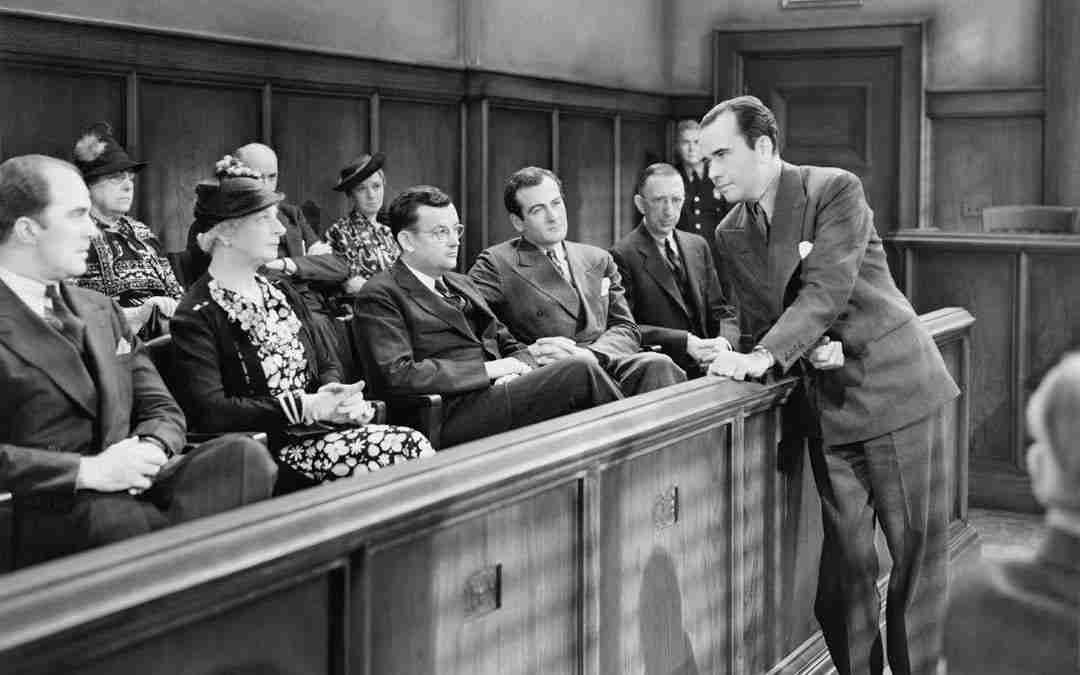 The 12 Angry Men movie was released in April of 1957, over 60 years ago. As the 12 Angry Men plot opens, a judge is giving a jury instructions as they are preparing to go into deliberations. They are sitting on a murder case where the accused is a young Hispanic man. As the jury gets settled in, they take a quick vote to see where they stand. It appears that the kid is guilty and 11 of the jurors are quick to rule so. Of the 12 Angry Men jurors, only Juror #8 writes “Not Guilty” on his slip of paper.

On the American Film Institute’s list of the Top 100 heroes in Movie History, number 28 on the list is “Juror #8” from the 12 Angry Men movie. To give you an idea of the company Juror #8 is in, #29 on the list is General Patton from the movie Patton.

It is quite incredible that Juror #8 is on this list considering what Henry Fonda does for most of the movie. He sits at a table, he washes his face, and in the big action sequence he paces a equivalent to walking once or twice around the table.

What did Juror 8 do to earn himself a spot on the list just a few spots lower than Superman and 9 spots higher than Obi-Wan Kenobi? He saves the life of a kid that everyone else was assumed was guilty.

The point he makes is that he is not saying the kid is not guilty, but rather, he felt they owed it to the kid and the process to at least have a conversation instead of rushing to the verdict. In an hour, if he was not able to convince anyone else to change their vote, he would change his.

The jury system works. It works because people who make up the jury take the process seriously. They discuss the issues. They ask each other questions and they debate, sometimes loudly, to get to the bottom of what they had heard in the courtroom. The question is: can people change their mind?

An hour later, they took another vote. The vote was now 10-2. Someone (Juror 9) changed his vote. Not because he was convinced, but because he thought the conversation should continue.

Juror 8 slowly, but methodically, questioned every fact in order to get to the truth. As each layer unraveled, the number of people who were sure of the kid’s guilt dwindled. Each man eventually came around. When Juror 7 switched his vote just to go along with the crowd, Juror 8 chastised him for cheapening the process.

You have to believe in the truth. Do you believe the kid is guilty? Vote that way! If you think he is not guilty, vote that way!

In the end, the vote was once again 11 – 1, except this time for acquittal. Can Juror 3 get passed his own issues to see the truth? Will he let his personal experience darken his vision and subject an innocent kid to suffer the consequences he doesn’t deserve?

A court case is about presenting facts. Whether it is a civil case or a criminal case, the goal is to present facts. Each side may disagree on what is fact and each side may have different views as to what the facts mean. That is where the jury comes in. They need to wade through everything they hear and decide what they believe the truth is. Sometimes the facts may not fit the circumstance and that is where having an impartial jury is vital to our legal system.

Juries Are Not Perfect.

We each bring our own experiences and prejudices to the jury room and may argue vehemently to support our position based on our prejudices rather than the facts of the case. In that case you have 5 or 11 other people to set you straight or try to convince you that the truth of the case does not lie in prejudice, but facts.

Juries aren’t perfect, but they are the best representation we have of our democracy in action.

Was This Article Helpful or Enjoyable?

If you enjoy reading our 12 Angry Men jurors analysis, please continue to read about more legal topics on our blog. An article that may interest you would be our law history piece on rarely acknowledged legal carer of Thomas Jefferson.

Additionally, if you any concerns or questions regarding a personal injury lawyer, construction accident, or car accident, be sure to contact us here!